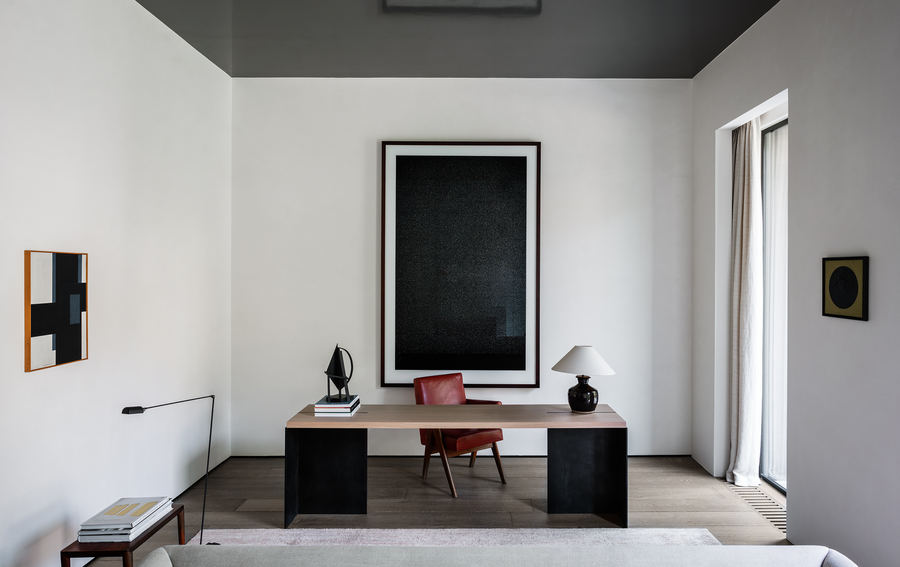 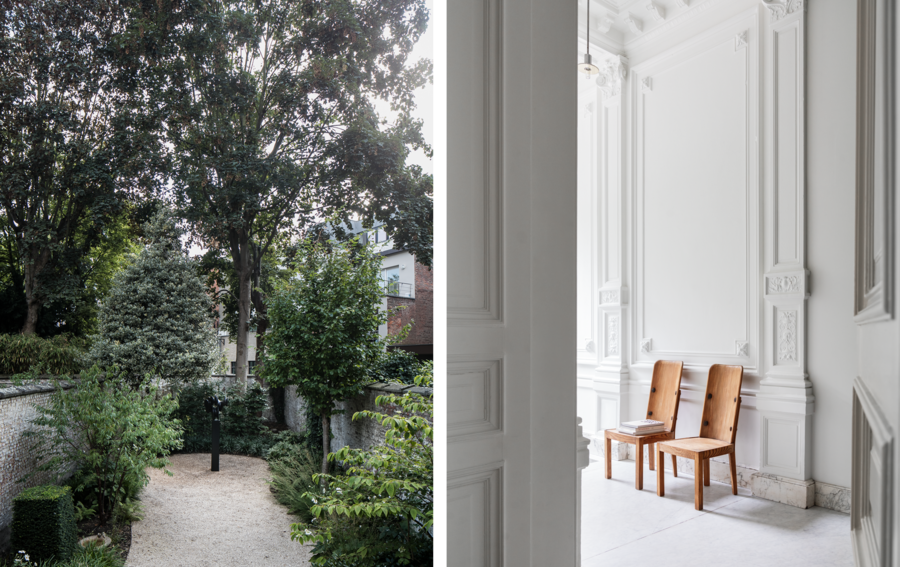 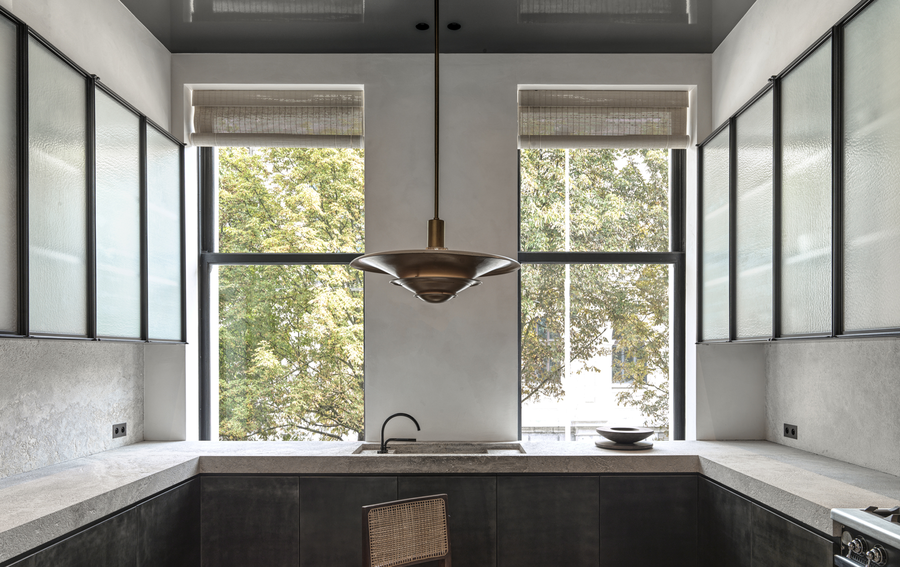 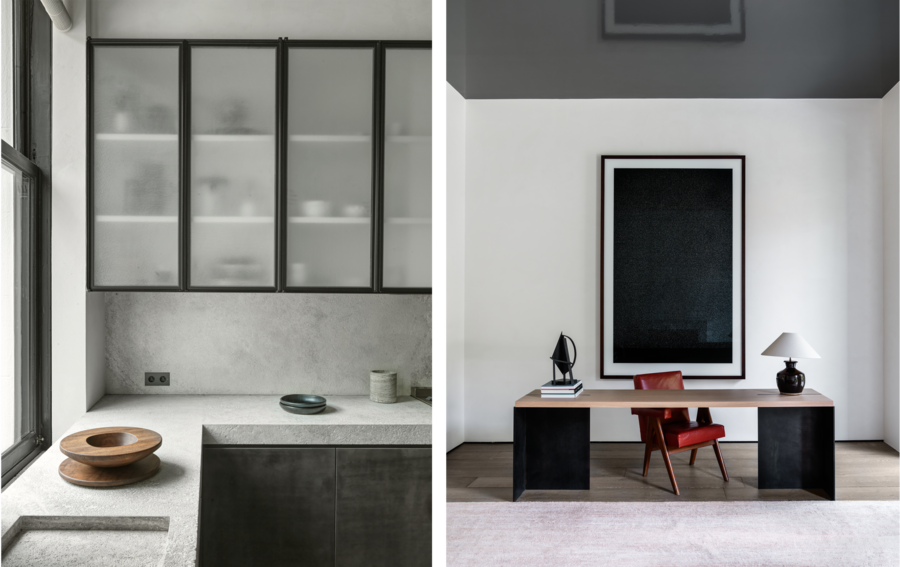 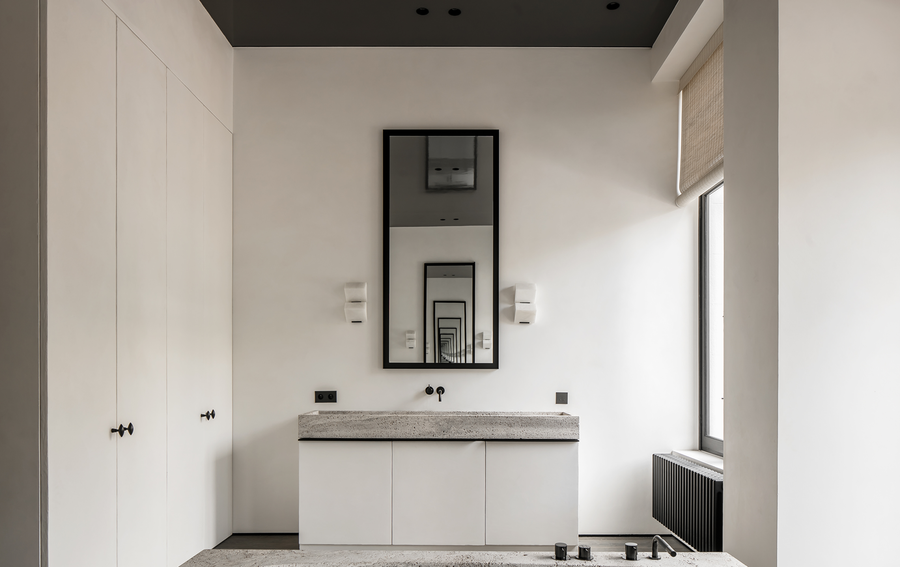 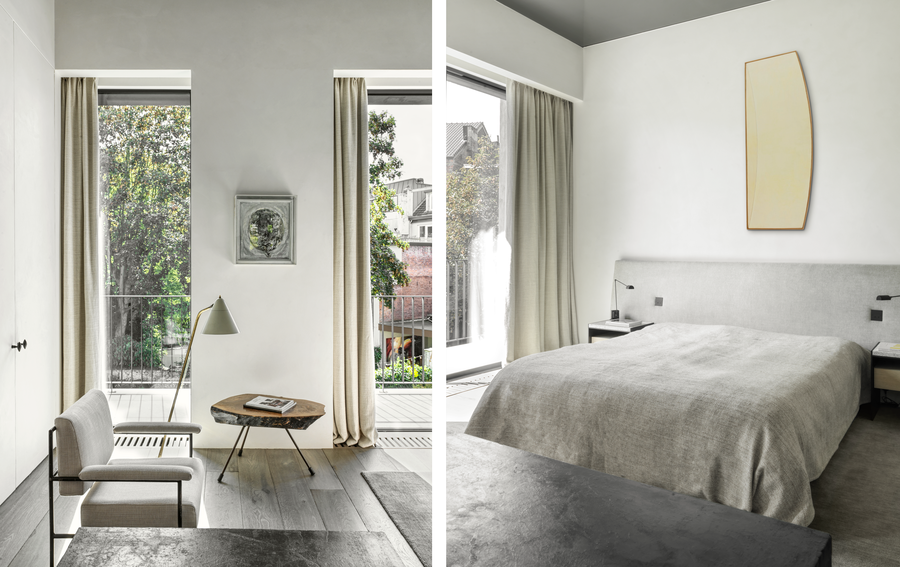 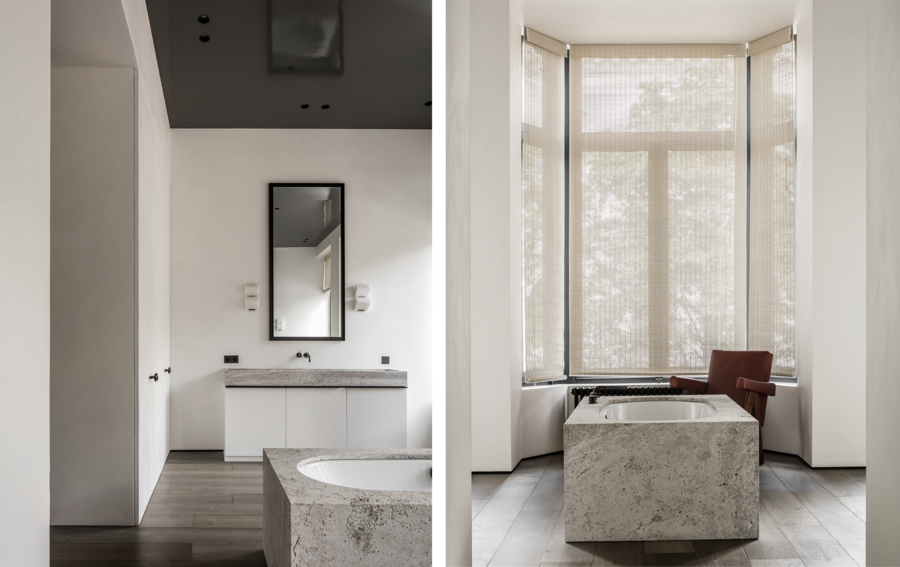 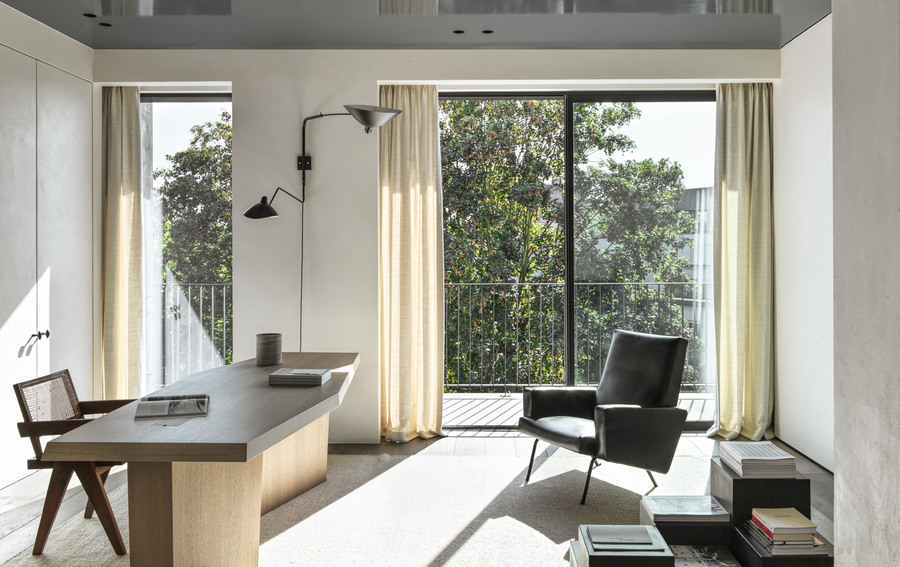 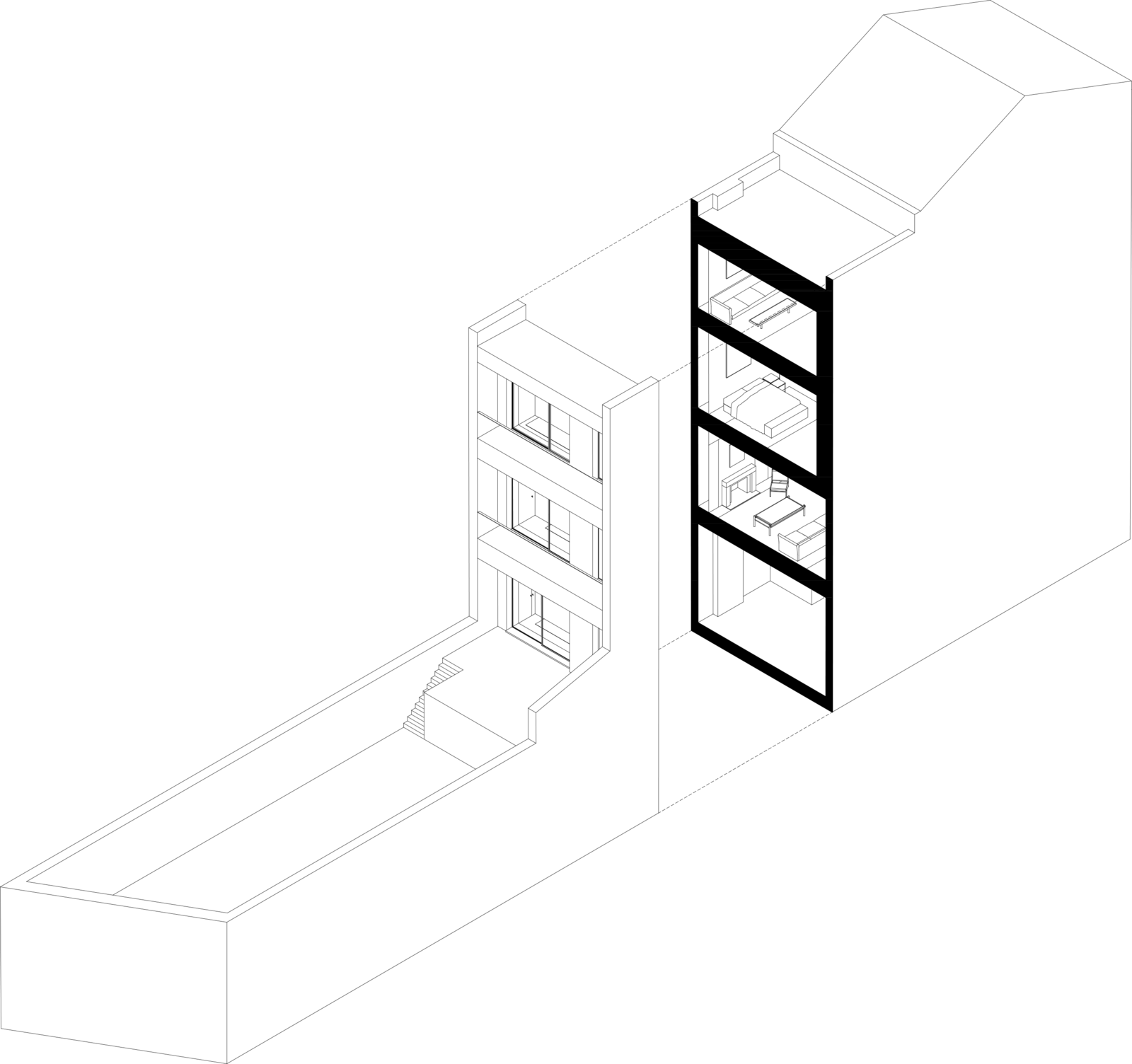 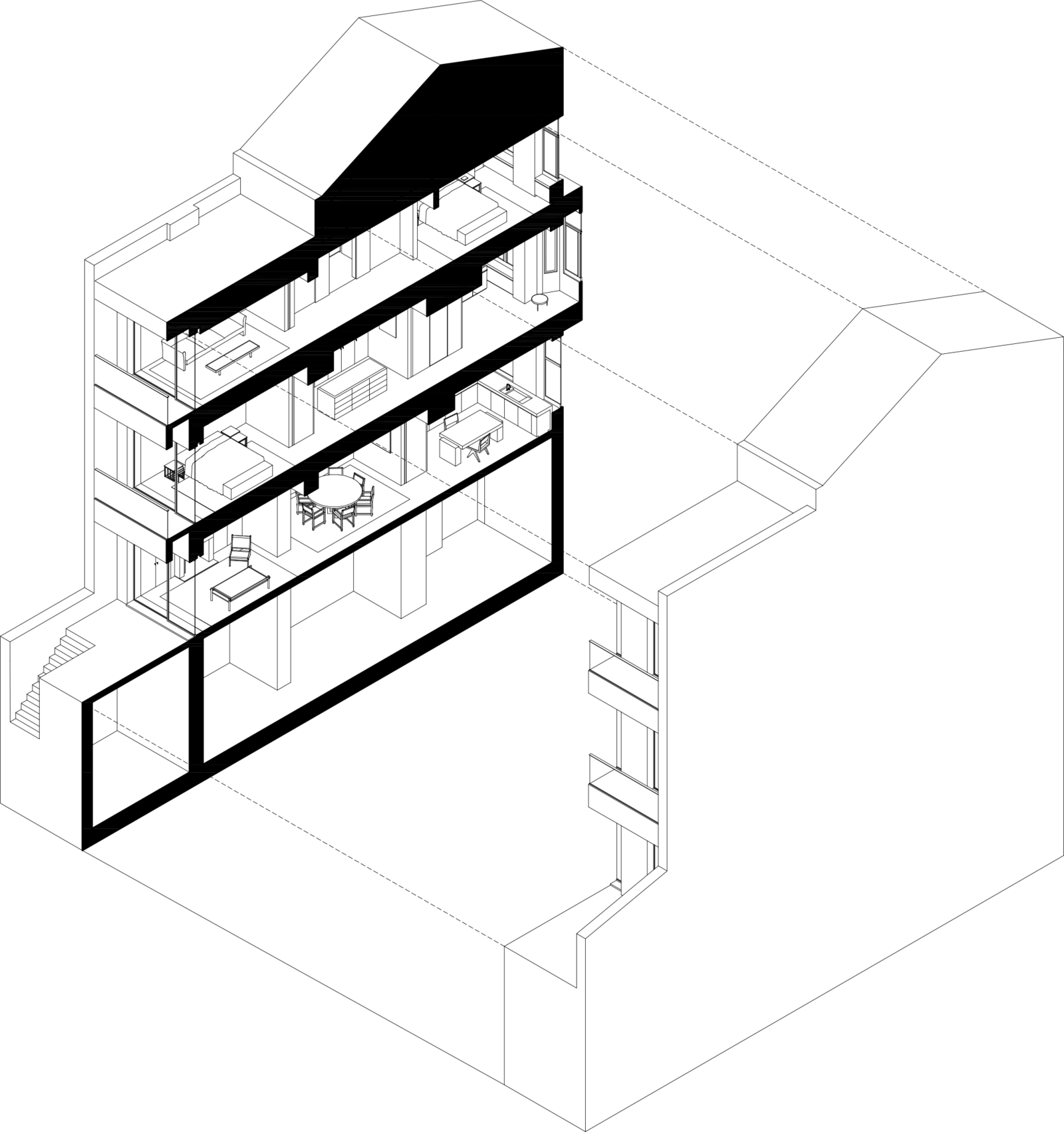 Our client had just bought a townhouse on the up-and-coming southern side of Antwerp. It was a beautiful structure, a neoclassical townhouse from the late 1870s with a garden in back. Unfortunately, it had been divided into cheap apartments in the 1970s and was left in a neglected state. The rear façade was dreadful and stylistically disconnected from the rest of the house with distracting aluminum windows. The challenge was how we could make it grand again with less than grand budget.

Right from the start, the client told me that he was looking for a complete house, right down to the slightest details from the interiors to the furniture and the art. This is exactly the sort of project we like to undertake. We worked closely together, and the choices we made from the beginning were the right ones. Very little changed from the start of the project to the end, which rarely happens. Because there was such a high level of trust with our client, we were inspired to put the maximum amount of energy into the project to make it work and to also push the limits of our creativity while still retaining our signature style. One especially interesting choice was that we had the high ceilings hand-lacquered in a glossy, dark gray color. Sometimes when ceiling finishes are identical to wall finishes, they end up feeling too high and less intimate for a private house. My grandfather’s office had a burgundy lacquered ceiling, and for a long time I had the idea of trying something similar. It’s a departure from our usual aesthetics, but I thought this was an occasion to try it out and we were all thrilled with the results. The reflectivity of the ceiling links the interior of the house with the garden outside.

The quality of the light we created gives the home a feeling of warmth and serenity throughout. It gives our client the ability to live in a very lively neighborhood in the city while still retaining the peacefulness of living in the country. The client is a fan of postwar Belgian art, and the house frames three paintings by Guy Vandenbranden that historically ground the house in his love for art. A mix of iconic furniture by Geraldo de Barros, Pierre Chapo, Pierre Jeanneret, and Louis Poulsen combined with lesser known pieces, including a custom desk I designed with playful angles to accentuate the interplay between light and shadow in the room, create a journey of learning and discovery across the space.